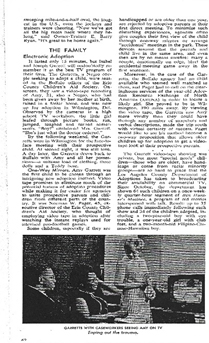 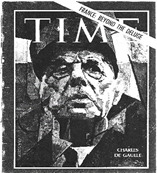 I was the first child in the history of our country to be adopted by way of video tape. My adoption was featured in TIME MAGAZINE of May 1968. Time Magazine stated that this type of adoption through video tape “took out the stress” of the adoption process. I was featured in the Buffalo News & the Delaware Journal along with other surrounding city newspapers. As a result of the article in TIME magazine it was the decision by the CBS network News to make a short documentary film, which was aired on the famous Roger Mudd Show. 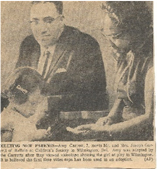 The DuPont Corporation of Delaware also played a vital role in making this video adoption take place. The DuPont Corporation not only provided financial assistance to Joseph & Isabel Garrett to adopt me, but they also provided full media coverage to publicize the historical event. A key result that extended from this video adoption procedure was that it revolutionized the way adoption agencies across the country could work together to facilitate adoptions expedient and efficient.

This foundation was established because I recognized part of the reason why so many children are in the foster program, or awaiting adoption, is the lack of substantial funding.

The goal of the Garrett Gift for Adoption Foundation is to be a major supplement source of funding for the adoption process and foster care. If financial resources are made available to parents who wish to adopt, along with the adoption agencies that are assisting them, I believe we will see a sharp decline of children waiting for the families they deserve.

More importantly this foundation was established in the honor and recognition of my parents Joseph and Isabel Garrett for their love and wonderful care they provided me. As this foundation begins its journey the Garrett Gift for Adoption Foundation is looking to do bigger and better things to help brings families together.

My adoption story is one that I’m proud of and love to share with others.  It is my hope and prayer that my story will be a blessing to those parents who read it, which will inspire and encourage parents who are either thinking about adopting a child or plan on entering foster care.